I brewed my first all grain batch by myself this weekend! I learned lots of lessons, the big one being make sure you know how much wort you actually collected from the mash tun.

I brewed a Pils Klösch, basically a Pilsner Recipe, but with Klösch yeast because I didn't want to lager and use lager yeast. 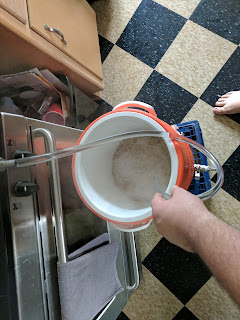 Apparently I didn't take many pictures during the brew day, it was pretty hectic, I was cleaning the house at the same time because people were coming over later.

But that is my new mash tun, I also got a new Brew Kettle 15.5 Gallons!

The Recipe I used was.

I missed my readings because I ended up not collecting enough wort, but luckily my OG was higher than I was shooting for so I just added more water to the fermentor. Though I added to much and now am a little under my target OG. So the ABV will be a little low, but it should still taste fine, I will let you guys know. I will be brewing again so I can fix my mistakes.